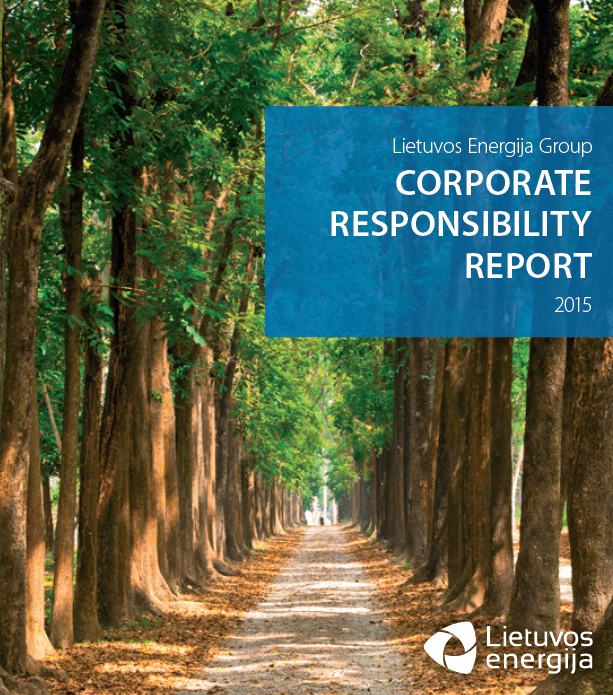 Lietuvos Energija Group, one of the largest energy companies in the Baltic States published its Corporate Responsibility Report in which the Group presented the principles of responsible business and corporate management the Company has been implementing in the daily activities in 2015. This practice will now be maintained every year – the public will be presented consolidated reports of Corporate Responsibility of the entire state-managed Group.

Reporting to the society and the relevant stakeholders on how responsibly the company has been operating and participating in the resolution of different economic, social and environmental issues, as well as the company’s contribution to the development of the society and the growth of economy are an important attribute of maturity of sustainably developed organisations. While previously Lietuvos Energija Group was informing the public of its responsible performance in annual activity reports, from now on the Group will be drawing up separate responsibility reports.

“We understand the importance of our activities to the society, the market and the environment; therefore, we plan our steps very carefully and responsibly. The energy under our management generates significant value: improves the living conditions, enhances capacities and productivity, and saves lives; therefore, we seek to ensure that the energy is safe, sustainable, produced and supplied responsibly, and the only change that our customers feel is the improving quality. The annually drawn up and submitted report is a natural stage in the development of our companies publicly disclosing the sustainable growth direction,” Dalius Misiūnas, Chairman of the Board and CEO of Lietuvos Energija, says.

The improved value chain and the operational efficiency – this is the main economic responsibility of Lietuvos Energija Group; the outcomes of the responsibility allow decreasing consumer prices, and facilitate creating an attractive investment environment in the country.

In 2015, the Group paid EUR 167.9 million in taxes, and its investment accounted for EUR 156.7 million. Having generated record level revenues and the highest net profit, in 2015, the dividends paid to the state budget by the company reached nearly EUR 86 million.

In view of such successful financial performance the company allocated up to 1 % of its profit for the transparently managed support fund, which during the reporting period allocated in excess of EUR 0.585 million fostering community projects, and a range of activities on the national and regional levels in social, education, art, sports, culture and science areas.

When planning development, the global scale climate change challenges force the company to take into account social-environmental problems and search for new solutions. In 2015, the Group defined wind energy as its future direction, launched a number of highly efficient CHP plants using waste and biofuel; in its production sector the company disposed of inefficient facilities (Units 5 and 6 of Elektrėnai power unit), opened a new biofuel boiler plant, was propagating electric cars, and prepared for the establishment of a solution centre operating on the basis of ESCO model (we already have some successfully implemented energy efficient projects).

Within the framework of the development of the partnership between business and science, in 2015 in cooperation with Kaunas University of Technology (KTU) opened a shared Lithuanian energy applied research centre; the centre will be the place for addressing technological challenges in the energy sector, and developing new business ideas. For the purpose of developing the area in 2016 Lietuvos Energija announced developing the first energy innovations fund in the Baltic States, with a view to attracting talents to the energy sector, enhancing service quality and efficiency boosting innovations.

Companies of the Group welcome and allow students of higher schools and vocational training facilities to acquire required practical skills:  in 2015, total 243 students were placed and completed their practical training, and 15 of them later were employed at the Group.

During 2015 the Group was continuing some broad-scale and long-term social responsibility projects, intended for children, the youth and the public at large, the common feature of which is an active participation of communities and target groups of the society, the ideas for safety, efficient use of energy and protection of the environment.

In 2015, for his successful public activities and social responsibility, sustainable financial performance, innovativeness, Dalius Misiūnas, Director General of Lietuvos Energija, was  awarded the “Manager of the Year, 2015” title. For the first time during the 16 years’ history of the prestigious contest organised by a weekly “Veidas” (The Face) the winner was the Manager of a state-managed company.

The Corporate Responsible Report is available at:  link.